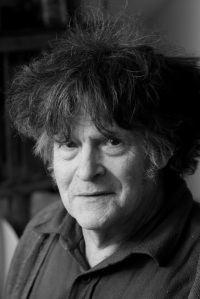 It was with great sadness that I attended the funeral of Heathcote Williams, who died on the 1st July. Heathcote had been ill, and in hospital, but he was still so full of life, ideas, and plans…

But how wonderful to see the beautiful church of St Barnabas in Oxford filled with hundreds of people who had come to mark his life and his legacy. When we arrived, Heathcote’s voice, a recorded reading of ‘Whale Nation’, inhabited the space entirely, echoing from the vaulted ceilling and swirling round us as if we were, indeed, in the deep seas or, perhaps, tiptoeing into eternity. Grey Gowrie’s wonderful eulogy, placing Heathcote in the pantheon of the great rebel writers which includes Shelley and William S. Burroughs.

There were portents, too, both grand and comedic – just as Heathcote would have ordained it:

First, as the mourners walked along the canal towpath towards the church, a huge hawk circled over us the whole way (H for Hawk, for Heathcote too, perhaps). Intimations of freedom? Michael Horovitz sang ‘Stairway to Heaven’…

Later, sitting outside a pub opposite the church, after the wicker coffin woven with flowers had begun its final journey, and as the murmuring congregation flowed along the street… a fly buzzed through my hair, making me jump out of my seat with surprise. It landed, legs in the air, stone dead on the table in front of me. It was exactly the image that Heathcote had used to illustrate his poem from the ‘American Porn’ collection, ‘The White House Fly’. Why me? Because when we were working on the book, we had some lengthy and energetic discussions about dramatically cutting ‘The White House Fly’… I thought the brilliance of the conceit was obscured by the original length of the poem. Heathcote, graciously, conceded, but I couldn’t help thinking he would have loved to have given me this last scare… and a laugh. The fly was solemnly placed in a plastic sandwich box by Tymon Dogg and thereafter accompanied us for the rest of an extraordinarily peripatetic wake.

Eton and Oxford educated, few would have anticipated his life-long devotion to anti-establishment causes, including running the infamous Rough Tough Cream Puff squatting ‘estate agency’ in Notting Hill (providing break-in housing tips for members of The Sex Pistols, The Clash and The Slits among others) in the 1970s.

He was a modest man and a joy to work with editorially.