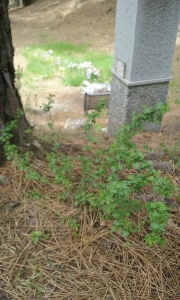 Our dear friend Jesus Arias, writer, musician, composer and doyen of Granada, Andalucia, died earlier in the year. He was still young with much ahead of him. Pneumonia swept him away as he slept.

His brothers buried his ashes in that terrible wooded vale just outside Visnar where thousands of men, women and children were shot dead during the Spanish civil war and buried in mass graves… among them Federico Garcia Lorca.

Jesus once went to Visnar with a spade, copious amounts of weed and Joe Strummer, on a quest to discover the actual resting place of Granada’s great poet.

They gave up on digging after a while but smoked so much pot that they felt they were communicating with Lorca and, as Jesus loved to relate, Joe announced, ‘This is a bad place, man, I can  feel it’.

There is a square named after Joe Strummer in Granada. Well a square-let, actually, Placeta Joe Strummer.

Jesus loved Lorca and his brothers felt he would like to share this cold earth with his hero and dug a hole in the shade of a large tree and placed his ashes there with tender remembrance.

Jesus’s brother Jose took us to visit and remember Jesus. As you leave the village of Visnar, the small white road snakes between increasingly obscure hills. Even this road is indescribably sinister and you can easily imagine military trucks packed with victims rattling along it, drawing to a slow stop at the place of execution.

Even though it was a sunny Spanish day it was deadly cold as we walked through the trees. The earth itself was thick and cold and lifeless. I caught a chill from that place and was ill for a while.

But… in the very spot where the Arias brothers had placed Jesus’s ashes, a plant had taken root and was now thriving. Fresh and green, it was a hawthorn. It seemed miraculous that this cold earth and this spot overshadowed by a tree could produce this little bush.

Later, we would discover that Hawthorn is not only the symbol of creativity (which Jesus had in abundance) but is the very plant from which Jesus Christ’s crown of thorns was fashioned. Is it fanciful to consider this as a message from Jesus, a poetic gesture from beyond the grave?